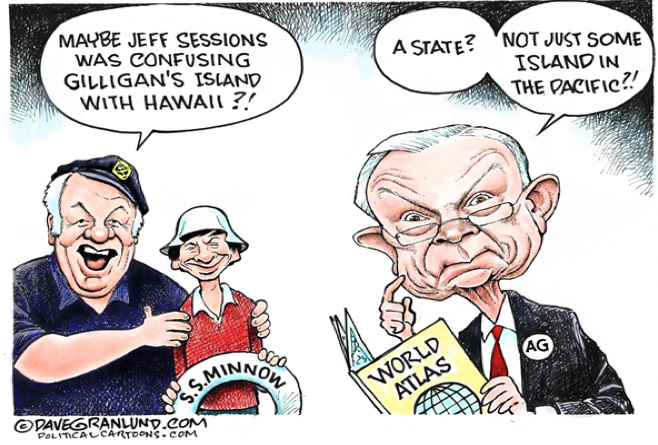 We are also capable of remaining the same for our entire lives. Like the calcium that never gets discovered, we can remain locked in sediment forever. As much as I wanted to believe Attorney General Jeff Sessions is no longer an old fashioned bigot from another time in our nation's history, his public words once again reveal a belief system that blatantly denigrates minorities and belittles the “other.”

Most recently, he said that he was “amazed” a judge in Hawaii could halt President Trump’s order blocking people from six predominately Muslim countries from entering the U.S.

As first reported on CNN, Trump’s top lawman said on The Mark Levin Show: “I really am amazed that a judge sitting on an island in the Pacific can issue an order that stops the President of the United States from what appears to be clearly his statutory and constitutional power.”

The judge he is referring to is U.S. District Judge Derrick Watson, a Hawaii native, who issued an order March 15 that put a stop to Trump’s second attempt at an unconstitutional and immoral travel ban. Sessions’ Department of Justice is challenging this before the U.S. 9th Circuit Court of Appeals, based in San Francisco.

There are several aspects to Session’s flub that I find disconcerting as an American citizen. First, what is Sessions doing on “The Mark Levin Show?” How is this a sign of good sense, common decency, and legal impartiality? As the nation’s most influential broker of crime and punishment, and as the supreme arbiter of social justice, Jeff Sessions should know that Mark Levin is a media personality who makes a living inciting impassioned feelings that verge on hate speech. The very act of showing up on his program is a violation of his ethical duties.

Second, Sessions is “amazed” that a judge in Hawaii could halt the president because he has never held genuine respect for people of color. He has done everything that is required of him to not ruin his political career -- and he has been careful to strategically amend his views with the passage of time -- but Jeff Sessions has always held a derogatory opinion of minorities in this country. He has been especially brutish to African-Americans.

In 1986, a Senate committee denied Sessions, then a 39-year-old U.S. attorney in Alabama, a federal judgeship. His former colleagues testified Sessions used the n-word and joked about the Ku Klux Klan, saying he thought they were “okay, until he learned that they smoked marijuana.”

That should have ended his rise to power. That is to say, if we lived in a non-racist society, those words would have stopped him cold in his tracks. We obviously live in a thoroughly racist society because the author of those words not only survived, he kept going all the way to the U.S. Capital.

The ideas that Sessions represents are dinosaurs that should have gone extinct as a result of the meteorite that was the Civil Rights Movement. Like a bridge between two eras, the Attorney General represents the reason we need to cross over into the promised land of a dream no longer deterred.