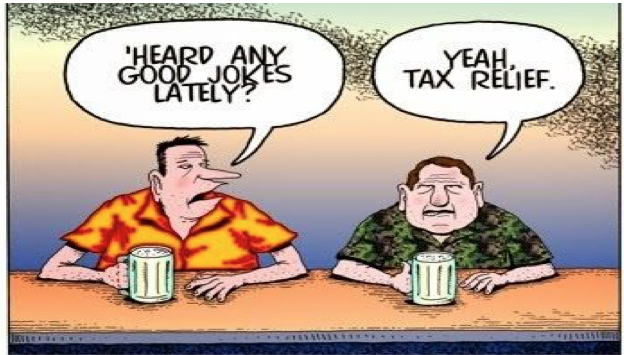 ALPERN AT LARGE--Seriously?  No foolin'?  Is "California Dreamin’" really doomed to devolve into one big marijuana-hazed April Fools Day joke, with those still sober stuck with the choice of living in, or fleeing from, the California Twilight Zone?

As exemplified by the many former and current patients I see who have fled, are fleeing, or will flee the once-Golden State, those who are tired of being overtaxed are running for their lives (their economic lives, at least) to the World of the Sane.

The World of Math and Economics.  You know ... Texas. Or Arizona.  Or Someplace Other Than California.

Remember when Jerry Brown was elected and re-elected to be the sane voice of fiscal reason? To be the voice of the "guy who grew up and was no longer Moonbeam Brown"? Who understood the need to keep crime low and the economy high?

The temporary tax on the rich?

Not temporary at all--and the money went off to the Never-Satiated Maw of the education unions and their lobbyists (with barely a dime going to the benefit of the students).  Oh yes, and the definition of "rich" is rather peculiar in a high-cost-of-living state such as ours.

The pension crisis that's the "Inconvenient Truth" that we are happy to ignore while focusing on environmental issues to a state that's gotten overpopulated, with insufficient water and woeful infrastructure?

To hell with that! Pension, shmension.  Nerd talk, and just don't bother me.

Well, along comes the gas/transportation tax that probably would have been fine if we hadn't already spent that money, and would be fine if we knew it would be spent well.

But it appears that "the rich" (whoever they are, considering they're bailing from the state and/or doing anything they can to hire foreign workers to reduce Californians' wages) won't tolerate any more taxes.

So now Governor Brown, and the Democratic majority leaders who run Sacramento, want to throw a gas tax so that EVERYONE will pay for the mess in our state capitol, and for the fact that we now pay former state workers as much or greater a percentage of our state budget than our current, tax-supported state public sector workforce.

What do they think we ARE, stupid?

Oh yeah, that's right.  We are, because we elected them.  And said yes to tax after misspent tax.  Or fee. Or bond measure.

LA County did tax itself with a couple of carefully-designed transportation measures (Measure R in 2008, and Measure M in 2016) to make sure transportation money went to...transportation! That was good policy, and transparent taxation, in action, and I'm proud to have played a very small part in promoting those measures.

But any new "transportation money" to Sacramento will just be made moot by taking that same amount for something else.  And something else is anything but building new universities, fixing our infrastructure, etc.

So if you want the gas tax, then fine.  At least you're putting your money where your mouth is.

Yet there is a GOP alternative to the Democratic transportation plan, and its backers claim it involves no taxes, allows for transportation-related revenue to fund only transportation, and allows more road repair projects Caltrans can bid out to private contractors to get more out of each dollar, and even provides more money for transportation than the Governor's proposal.

But hey, it's proposed by the GOP, and we all know that to become a Republican you have to swear fealty to Satan, Hitler, Bashar Assad, and ISIS, right?  So it's gotta be bad.

Yet either way, the concept of responsible taxation in Sacramento, with THIS governor and with THIS group of legislative leaders, has devolved into a big joke.

And therefore we can all choose whether or not we should laugh our way to higher gas prices than any other state in the nation ... and let out a big guffaw of laughter knowing that at least those higher gas prices are going to a great cause!

That cause being the favored and higher life forms in Sacramento.

(Kenneth S. Alpern, M.D. is a dermatologist who has served in clinics in Los Angeles, Orange, and Riverside Counties. He is also a Westside Village Zone Director and Board member of the Mar Vista Community Council (MVCC), previously co-chaired its Planning and Outreach Committees, and currently is Co-Chair of its MVCC Transportation/Infrastructure Committee. He is co-chair of the CD11 Transportation Advisory Committee and chairs the nonprofit Transit Coalition, and can be reached at alpern@marvista.org. He also co-chairs the grassroots Friends of the Green Line at www.fogl.us. The views expressed in this article are solely those of Dr. Alpern.)