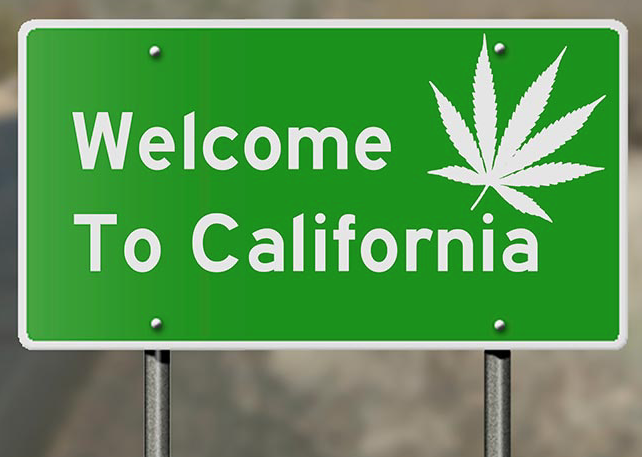 UPDATE April 2017 - California's Bureau of Medical Cannabis Regulation has released a notice of rule making with hearing dates starting June 1 and draft regulations for retailers, distributors, and labs. The California Department of Food and Agriculture has proposed regulations for cultivation, nurseries, and processing. The Department of Public Health has proposed rules for manufacturing, including extraction, processing and infusion.

WARNING: Non-citizens should beware about carrying medical marijuana through US airports. Although TSA and local poliice have generally been tolerant of medical marijuana in airline baggage in legal states like CA, this may no longer be the case when dealing with non-citizens. If you are not a U.S. citizen, think about whether you should carry your medical cannabis recommendation with you. Reports are that ICE is asking if people have their cards and/or use medical marijuana, and using that as grounds for deportation on grounds that they are in violation of the federal Controlled Substances Act. This means permanent residents, Visa holders, and those who are not naturalized nor are a natural born citizen.

California Marijuana Laws
Pursuant to Prop 64 as of Nov 9th, 2016

On November 8, 2016 California voters approved Prop. 64, also known as the Adult Use of Marijuana Act (AUMA), by a margin of 57-43%. Prop 64 makes the following changes to California law:

(1) Legalizes possession and use of up to one ounce of marijuana (or 8 grams of concentrates) and personal use cultivation of up to six plants per residence by adults 21 and over.
(2) Reduces penalties for most illegal cultivation, sale, transport, and possession for sale offenses from felonies to misdemeanors, with possible exceptions for repeat or violent offenders or other aggravating circumstances.
(3) Allows prior offenders to file to have their criminal records changed to what they would have been if Prop 64 had been in effect.
(4) Establishes a licensed regulation system for commercial production and sale of adult use cannabis beginning in Jan 1, 2018.

Commercial sale, cultivation, and production of marijuana are allowed only by licensed providers. Illegal sale, transport, manufacture, cultivation, or possession with intent to sell are generally punishable as misdemeanors, with felony enhancement allowed for special circumstances and three-time offenders. Minors under 18 are in no case subject to imprisonment, but may be punished by drug education and community service.

Prop 64 does not apply on federal property. Possession in national parklands is still illegal. Marijuana, including both THC and CBD, remains an illegal Schedule One substance under the U.S. Controlled Substances Act. Federal charges are typically brought only in large cases where commercial distribution is suspected (e.g., cultivation of several hundred plants).Text of the Controlled Substances Act.

Beginning in 2018, Prop 64 will allow the sale of marijuana for adult use in licensed stores under regulations to be established by the state Dept. of Marijuana Control (DMC) in conjunction with local governments. In the meantime, medical marijuana remains available in dispensaries for patients with a California doctor's recommendation in accordance with Prop. 215 and state law SB 420. Prop. 64 in no way affects or limits existing rights or protections of medical marijuana users under Prop 215. However, beginning in 2018, all marijuana, both adult use and medical, will be subject to new state taxes under Prop. 64. In addition, as of 2018, existing commercial medical marijuana providers will have to have state and local licenses pursuant to the Medical Cannabis Regulation and Safety Act (MCRSA), passed by the legislature in 2015. Under Prop 64, commercial sales and production of adult use marijuana will be separately licensed by the same agencies under similar, but different regulations. The DMC has overall responsibility for regulation and licensing of sales outlets. The Cal. Dept. of Food and Agriculture is in charge of regulating cultivation, Dept. of Public Health of manufacturing and testing; the Board of Equalization of tax collection, etc.

Prop 64 Regulations for Adult Use Providers

Driving under the influence: It is unlawful to drive while under the influence of marijuana (or alcohol or any other drug) by Vehicle Code 23152. "Under the influence" is not specifically defined in the statute, but is interpreted to imply some degree of impairment. Therefore the mere fact of having taken a toke of marijuana does not necessarily mean one is DUI. For evidence of impairment, officers may administer a field sobriety test. Arrestees may also be required to submit to their choice of a urine or blood test under Vehicle Code 23612. Since marijuana is detectable for much longer periods in urine than in blood (several days vs. several hours), a positive urine test constitutes much weaker proof of recent use and impairment than a positive blood test. If you haven't smoked marijuana recently and are not under the influence, you are better off to choose a blood test, since you will probably pass it. However, if you are a chronic smoker or have smoked recently, you are better off to choose a urine test; even though you can expect to test positive, the question will at least remain open as to whether you were actually "under the influence" at time of arrest.