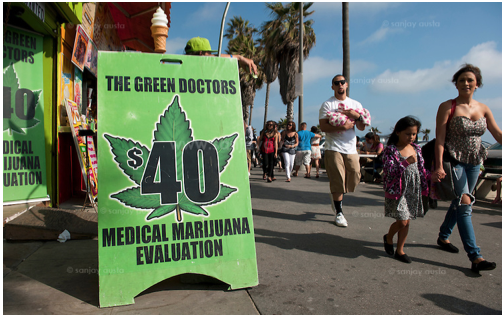 THIS IS WHAT I KNOW--Driving through West Hollywood, it’s hard not to notice the billboard for Zen Dispensary with its trendy Buddha icon. Medical marijuana dispensaries are no longer solely the provenance of dicey strip malls. And last November California voters supported Prop 64 which legalized recreational marijuana and establishes certain sales and cultivation taxes, passed by 56 percent. The sale and taxation of legalized marijuana will go into effect on January 1, 2018.

Yet, there is disconnect with the federal government, especially since President Trump took office. Trump spoke against legalization on the campaign trail and U.S. Attorney Jeffrey Sessions seems to have taken up this fight as his personal mission.

Sessions asked Congress to rescind protections for the cannabis industry. However, the federal budget appropriations bill contains a provision that blocks the Department of Justice from using federal funds to prevent states from “implementing their own laws that authorize the use, distribution, possession, or cultivation of medical marijuana.” The block does not yet apply to recreational marijuana – so that leaves prosecutorial discretion for the feds.

Last Tuesday, Senator Cory Booker (D-NJ) announced his proposed Marijuana Justice Act, aimed at ending the federal ban on marijuana. Despite support for legalization on both sides of the aisle, the White House and many Republican lawmakers do not support removing marijuana from the Controlled Substances Act, as proposed by Booker’s bill.

In addition to removing cannabis from the Controlled Substances Act, where it is listed along with drugs like heroin and LSD, Booker’s bill would withhold federal funding from states with prosecutorial and sentencing discrepancies for low-income residents and people of color.

“For decades, the failed War on Drugs has locked up millions of nonviolent drug offenders – especially for marijuana-related offenses – at an incredible cost of lost human potential, torn apart families and communities, and taxpayer dollars. The effects of the drug war have had a disproportionately devastating impact on Americans of color and the poor,” Senator Booker via Facebook.

The proposed bill would expunge prior federal marijuana use and possession crimes from records, as well as permit those currently serving sentences for marijuana-related offenses to apply for resentencing. Booker adds that funds withheld from offending states would be applied to a “community investment fund” to support community centers, job training, and reentry services for people who had served time for marijuana-related offenses.

Booker does not currently have a co-sponsor for his bill in Congress – but is working to get bipartisan support. Two years ago, he had partnered with Sens. Rand Paul and Kristen Gillibrand on legislation to legalize medical marijuana at the federal level.

The Attorney General’s threats to strictly enforce federal laws above state laws make the schism between the Trump administration and public opinion ever more clear. The burgeoning cannabis industry, which had over $6 billion in legal sales last year and is projected to reach $50 billion within the decade, and states like California where voters have legalized marijuana, needs supporters like Cory Booker.

(Beth Cone Kramer is a Los Angeles writer and a CityWatch columnist.)