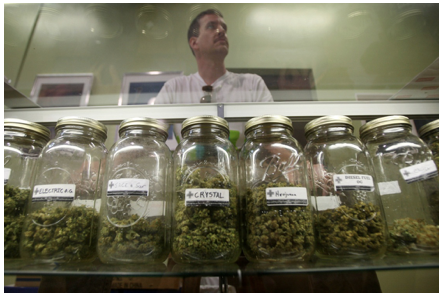 CRIME STATS--Are you interested in exploring an unfamiliar street, but wondering if it's safe? Well, you can always look around for reassuring signs—such as the presence of a medical marijuana dispensary.

In other words, more thriving businesses on a given street means more pedestrian traffic, which, in turn, means less crime. And pot shops perform that role as well as any other establishment.

The study, published in the Journal of Urban Economics, took advantage in a change in a city ordinance that led to the forced closing of 417 medical marijuana dispensaries in Los Angeles on June 7th, 2010. Another 180 were allowed to remain open.

Using block-level crime statistics obtained by the Los Angeles Police Department and country sheriff's department, the researchers noted the number of incidents in a given neighborhood in the 10 days prior to June 7th, and the 10 days that followed it.

They estimate that, in a one-third-of-a-mile radius around a closed dispensary, "property crimes increase by 12 percent." This spike was "largely driven by increases in larceny and, specifically, theft from vehicles."

Focusing in on the shuttered facility's immediate neighborhood, they found the effect was even more pronounced. "Thefts from vehicles increase by almost 30 percent at one-quarter of a mile, and by 100 percent at one-eighth of a mile around dispensaries ordered to close, relative to those allowed to remain open," they report.

Curious, the researchers conducted a similar analysis of restaurants that were temporarily closed due to health violations, and found very similar results: A 9 to 12 percent increase in property crimes within a one-third-of-a-mile radius. The spike evaporated once the restaurant reopened.

"We can conclude from our research that retail businesses are effective in lowering crime," Johnson said in announcing the results, "even when the retail business is a medical marijuana dispensary."

So fears that such shops will increase neighborhood crime turn out to be not just overblown, but completely wrong. Given that legal sales of recreational marijuana will begin in California on January 1st, that's very good news.

On the other hand, these findings will likely create cognitive dissonance for our nation's chief crime-fighter, the marijuana-hating Attorney General Jeff Sessions. If only there was some way he could relax his mind.

(Tom Jacobs writes for Pacific Standard Magazine …where this report was first posted.)