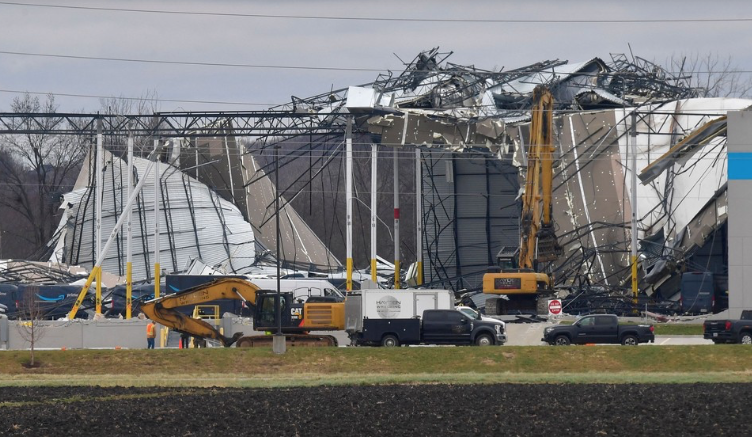 The only ethical obligation a corporation has to society is to deliver as much profit as possible to its big investors—everybody else be damned.

Indeed, several years ago, free-market extremist Milton Friedman actually decreed that the only ethical obligation a corporation has to society is to deliver as much profit as possible to its big investors—everybody else be damned. Any awfulness caused by their self-indulgent policy of profit maximization is excused by claiming that their iniquities "broke no laws." But—hello— they write the laws, intentionally defining corporate immorality as always technically legal.

America experienced the result of this mentality just before Christmas, when a line of supercell tornadoes ripped through Midwestern states, demolishing homes, businesses and even whole towns, killing more than 90 people. "A tragedy," wailed CEOs, the media and public officials! But wait: Those deaths were not destiny. No question that a twisting 190-mph vortex comes at us with cataclysmic power, but we're not helpless in the face of its fury. For years, an effective, comparatively cheap defense against killer tornadoes has been readily available: Safe rooms.

Basically, these are simple, concrete rooms built inside homes, schools, factories, shopping centers and elsewhere. People can shelter safely in them during big blows, surviving even if the building around them is shredded. Emergency management officials report that they provide "near absolute protection" from tornadoes. A decade ago, safety officials, insurance providers, consumer advocates and others had proposed amending our building codes to require these inexpensive, lifesaving structures in new commercial and public buildings. Such a provision would've saved many workers who were crushed in an Amazon warehouse, a candle-making factory and other buildings destroyed in December's storms.

But they died, because in 2012, members of a little-known industry-controlled group, the International Code Council, had quietly vetoed the proposal, calling it "overly restrictive," even declaring it "way too soon to do a knee jerk reaction" to tornado deaths.

All those buildings smashed by December's tornadoes were corporate death sites because their shoddy construction "broke no laws." Let's ask corporate America if it's still too soon for Congress to mandate tornado-safe rooms.

But instead of expressing distress and sorrow, Boss Bezos was perversely giddy. That's because the narcissistic gazillionaire had not made the video to mourn the deaths. Rather, ignoring Amazon's Illinois disaster, he had chosen this hour of tragedy to gloat to the world that his private space tourism business had just rocketed a small group of extremely rich thrill seekers on a 10-minute joyride some 66 miles up to the edge of space. As reported by the "Popular Information" newsletter, Bezos even dressed up in a pretend astronaut costume for this PR video, grinning proudly as he exclaimed that everyone involved was really "happy."

Back on Planet Earth, though, the families and co-workers of the employees crushed when Amazon's cheaply built structure collapsed on them were not happy with him. It took Bezos some 12 hours after his self-congratulatory media event before he finally issued a perfunctory tweet professing to be "heartbroken over the loss of our teammates."

But they weren't "lost" to a storm—they were killed by a deliberate corporate culture that routinely cuts corners on worker safety to put more profit in corporate pockets. First, the building itself was thrown up quickly with cheap, preassembled, 40-foot-high concrete walls that collapse inward in a tornado; second, Amazon's employees were expected to stay on the job that night even though there was a high risk of tornadoes; third, Amazon never bothered to hold tornado drills; and fourth, nearly all of the workers were classified as "contractors," letting Amazon dodge liability for on-the-job harm.

Oh, and Jeff might also want to reconsider one more bit of the corporate arrogance he revealed in this ugly incident: Those dead workers were not his "teammates," as he so cynically called them—even a high-flying captain doesn't treat teammates as throwaway units, carelessly sacrificing their lives for a few more dollars in corporate profit.

(Jim Hightower is a national radio commentator, writer, public speaker, and author of the books "Swim Against The Current: Even A Dead Fish Can Go With The Flow" (2008) and "There's Nothing in the Middle of the Road But Yellow Stripes and Dead Armadillos: A Work of Political Subversion" (1998). Hightower has spent three decades battling the Powers That Be on behalf of the Powers That Ought To Be - consumers, working families, environmentalists, small businesses, and just-plain-folks. This article is from Common Dreams.)