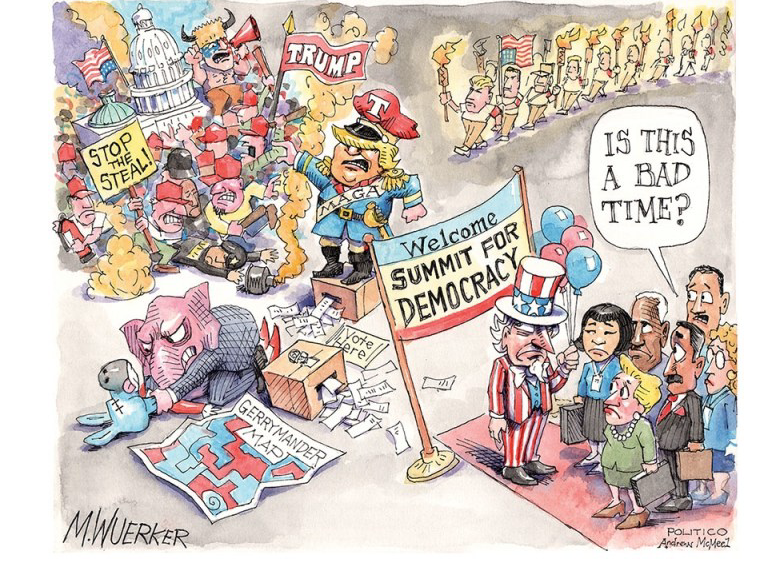 The National Park Service estimated 30,000 people attended the rally based on the number of people already in the area. So far, only 727 people have been arrested and charged, even though the FBI believes nearly three times that number were involved in the breaching of the U.S. Capitol building. The majority probably were just complicit in trespassing or protesting without a permit, ­which is to say they were used by those who actually conspired to disrupt and illegitimately overturn the last election. In other words, the majority of the insurrectionists were just pawns in a very desperate game of chess in which the losing side attempted to destroy the board and change the rules subverting the democratic transfer of power. It didn’t work… this time.

The delusional state of mind of the defeated ex-president is well documented in multiple books and articles since his loss to now President Joe Biden in November 2020.

Yet he is still espousing the “big lie” of the stolen election at every opportunity and was intending to do so again on the anniversary of the insurrection, until it became clear that non-right-wing media would not broadcast him live. He is supported in this effort by a whole echochamber of right-wing media disinformation from Fox News, One America Network, and Newsmax down to the thousands of AM talk radio programs. And let’s not forget the evangelical Christians and followers of QAnon — an American far-right cult organized around a conspiracy theory made by the anonymous Mr. Q.

This might be looked upon as some kind of farce if the stakes weren’t so high. ­ The very survival of our republic seems to hang on whether this mob of the disgruntled right-wing might actually start another civil war or whether there are enough courageous patriots to stand up for freedom, liberty and justice for all to stop them. Do not despair. We as a nation have been here before and survived.

Where we find ourselves today as a nation, is one largely controlled economically by an oligarchy supported by a capitalist social structure that values profits over people. The growing disparity between rich and poor and the working class has never been greater. However, the disgruntled mob has been directed at the Democrats, the corporate media and anything “liberal” in general.  Their ire is not totally without cause as the corporate media has done such a poor job of doing much more than chasing ratings for profits and consolidating monopolistic control. The Democratic Party, until recently, seems to have lost faith in the vision and promise of President Franklin Roosevelt’s New Deal. It seems that only members of the Congressional Progressive Caucus remembers this history.

However, what the right-wing mob that assaulted the U.S. Capitol a year ago didn’t get is that it is the Republican Party that is the prime example of oligarchy. An oligarchy, by definition, if you are unclear is a government by the few, especially despotic power exercised by a small, elite and privileged group for corrupt or selfish purposes. If that doesn’t define the former president and his cronies and grifters then I don’t know what does. And he is willing to sacrifice 245 years of our republican democratic laws and traditions to grab hold of despotic power. If he wasn’t such a narcissist, he might have actually pulled it off! That’s the danger.

The problem is that over the past 40 years or so, our nation has been drifting toward this kind of oligarchy. Trump is just the extreme example of it. Look at who is funding political campaigns, who sits on the corporate boards of directors, local chambers of commerce or even large charities.  It’s mostly wealthy elites — democracy is relegated to small things with little financial political power like neighborhood councils and associations, small cities or parent councils at schools (dark money has even begun invading school board races, most notably in Colorado last year). American-style democracy has become “a game of money politics” the perversion of one person one vote has resulted in a  “rule of the minority elite” except for some progressive political movements and a few politicians with morals.

In the end, the capital insurrectionists were duped, played as fools to do the bidding of right-wing elites desperate to hold on to power at any cost. Yet something fundamental needs to change in America if we plan on actually continuing our democratic norms, like actually practicing it in our daily lives. What would happen if teachers and parent councils got to vote on who was the next principal at their school? What would happen if members of a chamber of commerce voted in their next executive director? Or neighborhood councils given the power to actually ratify the appointments of local police captains?

Can you imagine what a local working democracy looks like in your life?

On a larger scale, getting rid of monopolies in the media, eliminating corporate donations to political campaigns and taxing billionaires would be a good start to saving our nation state.  It might even convince the insurrectionist mob to put down their weapons and let democracy work its messy course. One can only hope that the right-wing oligarchs have overplayed their hand, that the pandemic may actually teach us solidarity and civility. Hopefully, once people wake up to the truth, they will have the common sense to vote to make our government for the people, and by the people.

(James Preston Allen, founding publisher of the Los Angeles Harbor Areas Leading Independent Newspaper 1979- to present, is a journalist, visionary, artist and activist. Over the years Allen has championed many causes through his newspaper using his wit, common sense writing and community organizing to challenge some of the most entrenched political adversaries, powerful government agencies and corporations. This story was first published in Random Lengths News.)