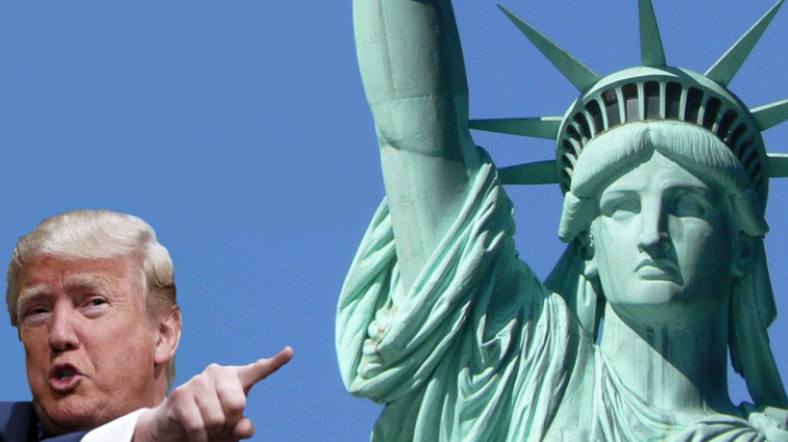 GUEST WORDS-We have it on the very best but very secret source that Trump has clandestine plans to return The Statue of Liberty to the French. Among his followers Trump has been heard to say the statue no longer reflects our pure white values.

Some say he’s confided to Steven Miller: “Give us your tired, your poor, your huddled masses from shithole countries. Thanks but no thanks.”

Truth be told, Trump clearly refutes the claim that the U.S. should be the champion of the poor and the dispossessed, a nation that draws its strength from its pluralism. The true gospel according to Trump is this: America’s greatness is the result of its white and Christian origins, the erosion of which spells doom for the national experiment. Institutions stand diluted by a stream of alien blood, with all its inherited misconceptions respecting the relationships of the governing power to the governed. His government is dedicated to halt the unalloyed welcome to all peoples.

So, we now must reveal:

New Heritage Two: For this we can thank Congressman Steve King: “We can’t restore our civilization with somebody else’s babies.”

New Heritage Three: Pure Trumpism: Prevent extinction with an onslaught of genocide which we will commence after re-election.

New Heritage Four: We would have to go back to historian Madison Grant who gave us this gem: He was the author of, “The Passing of the Great Race,” which spread the doctrine of race purity all over the globe. The exalted “Nordic” race that had founded America was in peril, and all of modern society’s accomplishments along with it.

New Heritage Five: There are good people on both sides – the new myth America that rejuvenates and rebrands “white genocide.”

New Heritage Six: Thanks Jonathan Peter Spiro, a historian and the author of “Defending the Master Race: Conservation, Eugenics, and the Legacy of Madison Grant (2009).” Even though the Germans had been directly influenced by Madison Grant and the American eugenics movement, when we fought Germany, because Germany was racist, racism became unacceptable in America. Our enemy was racist; therefore, we adopted antiracism as our creed.

New Heritage Seven: We give homage to Joseph Arthur de Gobineau, a French count, who first identified the “Aryan” race as “great, noble, and fruitful in the works of man on this earth.”

New Heritage Nine: Francis Walker, new immigrants lacked the pioneer spirit of their predecessors; they were made up of “beaten men from beaten races,” whose offspring were crowding out the fine “native” stock of white people.

New Heritage Twelve: Harding’s vice president and successor, Calvin Coolidge, found Grant’s thesis equally compelling. “There are racial considerations too grave to be brushed aside for any sentimental reasons.

New Heritage Thirteen: Albert Johnson, a Republican representative from Washington. A nativist and union buster embarked on an ambitious restrictionism: In 1917, Congress passed a law that banned immigration not just from Asian but also from Middle Eastern countries and imposed a literacy test on new immigrants.

New Heritage Fourteen:  Preeminent eugenicist named Harry Laughlin, whom Johnson named the committee’s “expert eugenics agent.” His appointment helped ensure that  concerns about “race suicide” would be a driving force in a quest that culminated, half a decade later, in the Immigration Act of 1924.

New Heritage Fifteen: Senator David Reed of Pennsylvania, who sponsored the 1924 bill in the Senate. feared that America was going the way of Rome, where the “inpouring of captives and alien slaves” had caused the empire to sink “into an impotency which made her the prey of every barbarian invader.”

People of both political persuasions like to tell a too-simple story about the course of this battle: World War II showed Americans the evil of racism, which was vanquished in the 1960s. The Civil Rights Act and the Voting Rights Act brought nonwhites into the American polity for good. The Immigration and Nationality Act of 1965 forever banished the racial definition of American identity embodied in the 1924 immigration bill.

The truth is that the rivalry never ended, and racism, despite its swift wartime eclipse, did not become extinct. The Nazis, initially puzzled by U.S. hostility, underestimated the American commitment to democracy.

U.S. soldiers of all backgrounds and faiths fought to defend democracy and demanded that their country live up to it. Their valor helped defeat first the Nazis, and then the American laws that the Nazis had so admired. What the Nazis saw as a weakness turned out to be a strength, and it destroyed them.

Gore Vidal’s book, “The United States of Amnesia,” will and should never pass. But today, as in yesteryear, America reflects the current conflict wrought by the inferior superiors of the Trump administration and its opponents, those rival principles of exclusion and pluralism confronting each other more starkly than ever. And the ideology that has gained ground under Trump may well not disappear when Trump does. His ravings and rantings, his bluster and bombastic rhetoric has found new life among extremists at home and abroad, and echoes of his rhetoric can be heard from the unleashed free radicals of the Republican base and the conservative media figures the base trusts, as well as  --  once again  --  blemishing the highest reaches of government.

Trump’s genuine fake Clairol blondness and his stated preference for Scandinavian immigrants over those from Latin America or Africa, and his expressed disdain for the Fourteenth Amendment’s guarantee of birthright citizenship pollute our democracy like never before.

Whether intentional or not, mainstream media coverage of demographic change in the U.S. has a tendency to portray as justified the fear and anger of white Americans who believe their political power is threatened by immigration --  as though the political views of today’s newcomers were determined by genetic inheritance rather than persuasion.

The danger of Trumpism, and its implications for both America and the world, is very real. External forces have rarely been the gravest threat to the social order and political foundations of the United States. Rather, the source of greatest danger has been those who would choose white purity over a diverse democracy. When Americans abandon their commitment to pluralism, catastrophe follows.

In summation: Trump’s new Maga Carta is gooey, sticky slippery science based on dogmatic assumptions which cannot endure criticism. The empirical flimsiness of race science unwittingly acknowledges a consistent truth about racism, which is that race is whatever those in power say it is.

I believe in science, not Clockwork Orange. Tick Tock. Trump’s time is up!