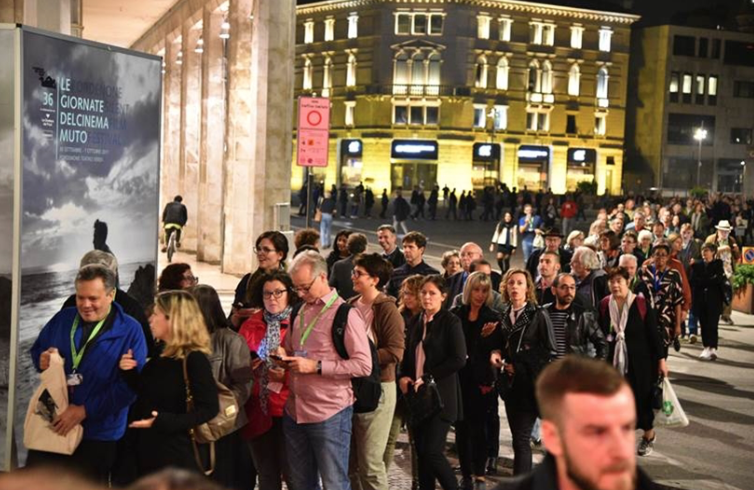 GELFAND’S WORLD (PORDENONE, ITALY--Here at Le Giornate del Cinema Muto, otherwise known as the Pordenone silent film festival, there has been a chance to consider both world politics and art. World politics is losing out, but art is hanging in there.

Let’s start out with a little nod to an American art form that has taken its own place among the world’s great art forms. Film and its close cousin television have become the major expressive forms of the twentieth and now twenty first centuries. This is not to downplay the novel or the  short story, but as Walter Kerr explained to us long ago, the great art of one era develops out of the popular art form of the day, just as Shakespeare’s plays developed out of popular entertainment in London rather than up in the academic confines of Oxford or Cambridge. Some 38 years ago, a group of cinefiles in northeastern Italy held a celebration of the origins of cinema. Joined by English and some American colleagues, along with a sprinkling of those from other parts of Europe, they created this festival, which has become its own sort of mecca for those who revel in film history, origins of cinema, and the development of film culture.

It's always been a source of curiosity and some pride to me that the festival in this far off place uses as its logo the image of our own Buster Keaton. That is fitting and proper because Keaton was actually that good. But there have been lots of great European and Asian filmmakers, witness Abel Gance and Akira Kurosawa. But they didn’t work on the corner adjacent to Santa Monica Blvd or down the road a piece.

One other clue to share with you. The festival likes to present silent era films in the way they were supposed to be presented, that is to say, with musical accompaniment. In the old days in a big theater like Graumans Chinese or the Los Angeles, the film would be accompanied by an orchestra. In the smaller sorts of venues, the films would be accompanied by a piano or an organ. We still get a little of that sort of presentation at a few venues such as Cinecon and UCLA. The festival here likes to create great opening and closing night numbers using a full-sized orchestra recruited from its own talented local population.

And this year, the festival chose to present a quintessential American product. Here are a couple of clues. It was made partly in the back streets of Hollywood and partly in the area east of what is now L.A. City Hall in what was at the time China Town. We might refer to it as Old Chinatown because it was torn down in order to build the new Union Station railroad hub in the late 1930s. It starred a fairly weather-beaten looking hobo type … kind of a homeless vagabond … and a little boy of about five years of age with a mop of blond hair and baggy overalls. The plot line is simplicity itself. A husbandless woman in an era where such things were frowned upon abandons here newborn baby to the back seat of a rich couple’s car. She has second thoughts almost immediately, but when she returns, the car has been stolen by thieves, who themselves abandon the baby in a city slum. She spends almost the remainder of the film looking for the kid.

Thus, the film The Kid, played by Jackie Coogan, who is found and adopted by Charles Chaplin. There isn’t a lot of point in being critical of this movie. It’s been written about by countless authors, critics and simple appreciators. Leave it to say that an international audience cheered and applauded loudly at the finish. Friends from as far away as Finland and Australia talked about crying out loud. A substantial Italian audience roared in appreciation. It is hard to describe what a terrific performance Jackie Coogan put on at that tender age, and Chaplin was at his best, even though it was still early in his career. This film is worth seeing in a full-sized theater.

It’s nice to know that American had a part in creating a world art form and has taken its place at a level equal to other artistic cultures as this form develops. I would not try to pretend that we are better or worse than other cinematic nations such as Italy, Britain, France, or Japan, but we are all on a level of artistic equality. That’s worth saying, and Los Angeles has its own part.

The second part of this brief discussion involves both current politics and old film culture. The curators of this edition of the festival have gone back to the days of the 1910s to find rebellious and independent women. The director took tongue out of cheek for the brief moment it took to thumb his nose at the Trump use of the term -- Such a Nasty Woman. Thus, the session called Nasty Women. It was nice to see the French film industry create their own rebellious sort by the name of Leontine as early as 1910. Actually, there is a large history of cinematic treatment of male abuse of females going all the way back to the earliest days of film. There is a clear and obvious irony here when you look at all these generations of films about males abusing women and then look at the modern scandals engulfing the industry at the level of reality.

It was also of interest to be reminded that even in the earliest days of film, the misuse of juries by ambitious prosecutors was revealed. In the first couple of days of this festival, we got comedic versions of juries who would give nightmares to any defense  lawyer, particularly in a little known short fiction from 1926 America called Not Guilty.

How can we miss the latest in the developing national scandal. From this distanced perspective, I am reading about another whistle blower surfacing over the Ukrain scandal. The one thing that American journalists should remember to pound on is that this is a story of extortion pure and simple --- the withholding of hundreds of millions of dollars of armaments until the Ukrainians deliver dirt on the president’s political opponents. This is not, as Trump keeps trying to say, that the call was nothing. It is a pure and simple violation of standards of conduct that are intellectually on a par with treason, blackmail, and that term we are all getting used to, high crimes and misdemeanors.

A brief survey of Europeans on the scene here is not really surprising. They, along with us, are hoping that this situation comes to an end with the rapid end of the Trump presidency. The Brits are, for the most part, still hopeful that something will happen to bring an end to the idea of Brexit.

One last thought on a historical item of no consequence. A 1914 short film from Estonia whose title translates as Bear Hunt in Parnu County was summarized by me and others as the silliest damn film ever. Then again, maybe it was an incisive view of human nature involving overprivileged men whose immediate reaction to the discovery of a bear in the neighborhood is to round up a posse and fire a huge round of gunfire at the poor beast. In either case, there is a place for this one in film classes.

(Bob Gelfand writes on science, culture, and politics for CityWatch. He can be reached at amrep535@sbcglobal)