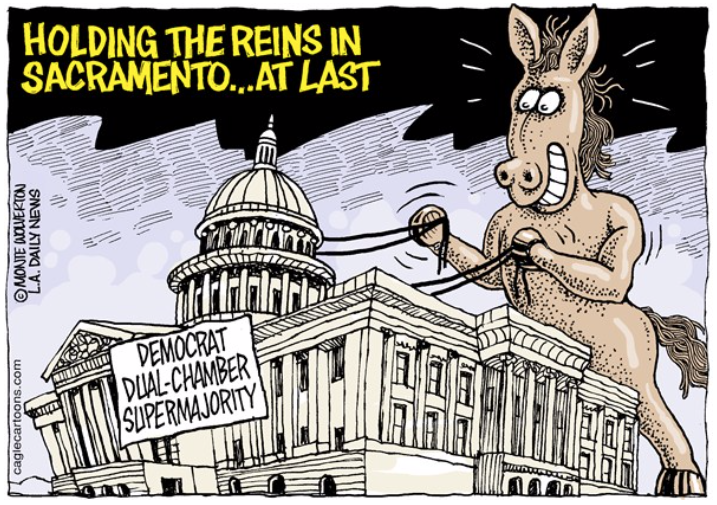 EASTSIDER-I’m guessing that less than five percent of registered voters in California pay any attention to how our California legislature does business.

Evidently, that what made it possible for our “progressive” (hah!) Democratic legislature to slide into an exclusive secret club where you and I have no role in what legislation gets enacted into law.

What Actually Is ‘Gut and Amend”?

The concept is quite simple, if odious. As Chris Micheli, a Sacramento insider and law professor at McGeorge School of Law describes it:

“One of the controversial occurrences during the annual California Legislative Session is so-called ‘gut-and-amend bills.’ According to the Legislative Counsel, these measures are defined as ‘when amendments to a bill remove the current contents in their entirety and replace them with different provisions.’”

In fact, it got so bad that in 2016, we voted for Proposition 54, which at least required 72 hours of advance notice before these bills could be voted on.

Honest. Typically, this process occurs at the very end of a legislative session, in committee, so that you and I will have no idea what the hell the legislators are doing. It’s a great time at the Capitol, with every lobbyist, special interest, and party hack goin’ for the gold as you and I get sold out.

While the process has been around a long time, now that we have a permanent Democratic supermajority, the volume is crazy.

And Then There’s Haydee

Here in LA we are lucky enough to have an actual watchdog on all this madness. Her name is Haydee Feldstein, who, I must point out, is a Neighborhood Council activist. She tirelessly tracks all these bills, particularly land use, where the legislature seems hell bent on preempting local control of planning in favor of statewide developer laws.

You can find a couple of her articles on Scott Weiner’s grandiose land use bills here.

I probably don’t have to mention that Scott Weiner (D-San Francisco) is by far the biggest proponent of eliminating local control of land use.

Anyhow, she recently gave us a great primer on how all of this works, using the example of how Scott Weiner (D-San Francisco), managed to use the “gut and amend” process to transform a bill in 2017 from extending drinking hours from 2 a.m. to 4 a.m. into modifying how and for how long sex offenders have to register. I kid you not.

You can find the article here, and it provides a pretty dramatic example of what our legislative critters are up to in the dark.

Notice how quickly all this happened:

“The final version of Sex Offenders now known as SB 384, a sex offender registry bill rather than a bill about last call for alcohol sales, passed through both houses in just eight days — from September 7, 2017, when Assemblymember Lowe moved to accept the amended language and the Assembly re-referred the bill to the Public Safety Committee to the passage by both houses of the Legislature on September 15, 2017.”

Why All This is Important

For us Angelenos, the real threat of the back scratchin’ in the dark gut and amend Democrats, is that we quietly get sold out and have our local control of land use shooed to the developer/investor lobbyists in Sacramento. Remember, SB50 darn near passed this year.

For anyone who doesn’t know or remember what SB 50 was:

“This bill would authorize a development proponent of a neighborhood multifamily project located on an eligible parcel to submit an application for a streamlined, ministerial approval process that is not subject to a conditional use permit. The bill would define a “neighborhood multifamily project” to mean a project to construct a multifamily structure on vacant land, or to convert an existing structure that does not require substantial exterior alteration into a multifamily structure, consisting of up to 4 residential dwelling units and that meets local height, setback, and lot coverage zoning requirements as they existed on July 1, 2019. The bill would also define “eligible parcel” to mean a parcel that meets specified requirements, including requirements relating to the location of the parcel and restricting the demolition of certain housing development that may already exist on the site.”

Wow. Goodbye to our single-family neighborhoods.

As Los Angeles magazine put it:

“Essentially, the measure would “upzone” much of the land currently dedicated to single-family housing, allowing for developers to build duplexes, triplexes, or fourplexes if they would like to. In larger counties, lots that are considered “job-rich” or “transit-rich” would be upzoned even further, allowing for taller buildings and/or more homes.”

Going back to my original point, back when there were a reasonable number of Republicans to counter the majority of Democrats, they could keep each other somewhat honest. At least as honest as a professional politician can be expected to be. Now, however, we have an overwhelming Democratic supermajority in both houses of the legislature, and what we get are political machinations to back door unpopular bills (if they ever actually asked the voters).

You may remember it was Kevin de Leon, then Speaker of the Senate, who gave us our current Gas Tax, in a back room deal that cost at least one democrat his seat (he was recalled). So now de Leon rents a room in LA Council District 14 and is running to replace our termed-out Jose Huizar, under investigation by the FBI.

Seems to me that we shouldn’t have a gut and amend process. If a bill is on the up and up, it should be able to move through both houses of the legislature and get voted into law.

Unfortunately, our current system promotes establishment top-down democrats (with the big buck donations), choreographed by people like former CADEM Chair Eric Bauman. If grassroots bottom-up “small d” democrats can start to elect local folks who will represent communities that they actually live in, maybe we could turn this around.

If we don’t, get ready for Scott Weiner and the professional Democrats like Kevin de Leon.

Please check out the candidates before you vote somebody’s slate.

(Tony Butka is an Eastside community activist, who has served on a neighborhood council, has a background in government and is a contributor to CityWatch.) Edited for CityWatch by Linda Abrams.