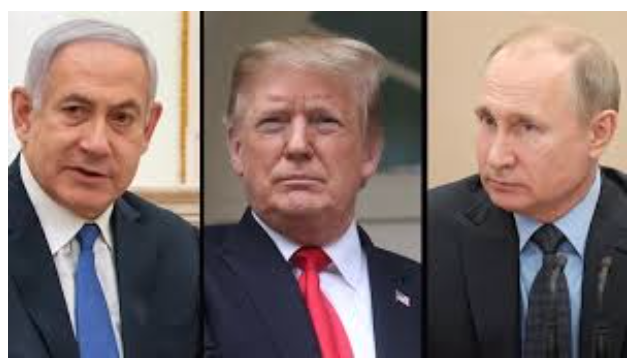 WORLD WATCH--I am getting sick and tired of the raging violent conflicts overseas and the political mess here at home which is consuming us day in and day out.

I thought that for a change a little satire is in order.

During the annual meeting of the United Nation General Assembly Trump was walking in one of the UN halls surrounded by a few of his advisors when he spotted Putin coming from the opposite direction.

Trump (turning to Pompeo): Hey Mike, I know that I am meeting Putin tomorrow, but I would like to have coffee with him, just to chat about the shenanigans that are going on.

Pompeo: Yeah, why not… Oh, look there, Kim Jong Un seems to be having a good time with Netanyahu. I know they never met before, but they seem like real good buddies.

Trump: You know that Netanyahu is a fox and Kim is trickster, totally unreliable but I can outfox them both any time of the day.

Pompeo: Boy, do I know that – uh, I mean it complementarily, sir.

Trump: I know, I know… do you think you would be here otherwise? Listen, this sound crazy, but why don’t you go and arrange for a meeting between the four of us – I am going to show them who is the real genius in the room.

Pompeo: That would be something. Absolutely, Donald, I will do it right away.

Trump: Wait, for you I am not Donald: I am Mr. President, got it?

Trump: We’ll meet across the street at our Ambassador’s office.

Pompeo: Am I invited?

Trump: No, what the heck do I need you for? You know I can handle anything, anywhere, anytime. I know more about national security, intelligence, so-called climate change and on and on, you name it, than any expert in these fields, believe me.

Pompeo: I can certainly attest to that, Mr. President.

Trump is sitting on the sofa at the Ambassador office. There is a knock on the door.

Trump: Come on in.

Trump: (to himself- What a nasty blackmailer). Hello, Vlad, my dear, dear friend, how are you?

Vlad: (to himself- An idiot as always). I am doing great Donald. How have you been buddy?

Trump: Well, you know, everybody is going crazy in Washington.

There is another knock on the door.

Trump: It must be Netanyahu and Kim… (to himself- A fat slob and a boot licker). Come in.

Trump: Welcome guys. I didn’t know you knew each other.

Bibi: We didn’t, but we do now, and boy we have so much in common. Frankly, we both also want what we don’t have. My dear friend Kim here wants to have the same influence I have on you… (to himself, he is a nut to even think it), and I want the absolute power that Kim enjoys.

Trump: You are both ridiculous dreamers. I use you Bibi to please the evangelicals that I need, and I fool around with you Kim and you love it. Kim can now brag that he met me – the most powerful man on earth – it’s me, you know, me, me… but it’s not enough.

Kim: (to himself- What a pompous fool). Come on, Donald, how much more do you want, you are the president of the United States.

Trump: Okay, okay… you too can call me Donald, but only privately, hey.

Kim: You know, Donald, I know you very well, you are a sucker for adulation and praise Donald, you want to be worshiped. But guess what (grinning) I know how to play you.

Vlad: (to himself- Here we have the bad and the ugly). Neither of you have what I have.

Kim, your people are starving to death and you, Donald, are at the mercy of the democrats and me of course. You can be impeached, and it will all be over.

Vlad: In my country, ah, people complain and demonstrate, so what? I keep on doing what I do best, I steal, cheat and no one can do a damn thing about it.

Bibi: (to himself- What a bunch of clowns). Look guys, they don’t call me the king of Israel for nothing. I have served as prime minister longer than any of my predecessors, and I will literally deal with the devil to be reelected. No one can catch up with me.

Trump: Wait a minute Bibi, I am the King of Israel. Didn’t you hear what your Jewish people are saying? I am the chosen.

Bibi: (to himself- Here we go again). I won’t argue with you Donald, as far as I am concerned you are the chosen. God chose you to let me do what I want with the

Palestinians. If you prefer the title of the Chosen King, that would be just fine with me.

Trump: Now that we have settled that I must tell you Bibi, you remind me of me. Thanks to this devil here, my friend Vlad, I won the first election and he is going to make sure that I win in 2020.

Vlad: (to himself- What a sucker). Right on, Donald. You can count on me, buddy.

Bibi: You will see, even though I am indicted for a few crimes, I am still here, running again. And I have my dear friend Donald, to back me up all the way.

Kim: You are all talking nonsense. I don’t have to run for anything. In my country I do what I want, when I want it and those who ask any questions, they just poof disappear. Can any of you make the same claim?

Vlad: (to himself- What an arrogant dope). Stop bragging who has more power. We are all power hungry, and ruthless, we to do whatever it takes to stay in power. That’s what we all have in common, nothing else matter. Right?

Trump: (to himself- I wish I was in Vlad’s shoes). It’s easy for you to say. I’m facing impeachment. The democrats just won’t let go.

Vlad: Why worry? Your party in the Senate will back you anyway.

Trump: We’ll see… Anyway, as long as I’m still exploiting my position to make tons of money from foreigners and government officials who stay in my hotels and resorts, and with my business acumen, as always, I will end up on top.

Bibi: (to himself- As long as he does what I want). I think you are doing the right thing my friend; I mean you are the President of the USA, show them.

Trump: Anyhow, let’s talk business. I am disappointed, none of you are staying in my hotel on Central Park. Don’t tell me it’s too far from the UN.

Trump: No, hundreds of foreign and officials from my own government stay in my hotels, even military officers, and watch, the next G7 meeting will be held at my Doral resort. You better believe it.

Kim: Yeah, but can you imagine what will happen if my people see me staying in your hotel? They’ll think I sold my country down the river.

Trump: I thought you said you can do whatever you want, and no one can question you.

Kim: Yeah, true, but I am not like you. I still want to maintain at least the facade of being honest.

Vlad: (to himself- They are such morons). Stop being silly talking about honesty. What does that mean? We are serving our countries. Doesn’t that give us some special privileges? They call it corruption. My foot! It’s compensation. This is how we do business in Russia.

Trump: Very well said my friend. I know how hard I work, instead of playing golf every day, I play only twice, maybe three times a week and watch Fox news no more than three hours a day—you know it’s my executive time, but the democrats still have the chutzpah to criticize me with all the sacrifices I make.

Bibi: (to himself- He is crazy alright). You’re right Donald, the same goes for my country. There is no appreciation of how much I gave and how little I get in return. So, I steal a little, cheat here and there, but I made my country a global power.

Trump: You’re damn right. I have accomplished more in less than three years than any of my three predecessors in twenty-four years believe me, and people still show no appreciation, No respect.

Kim: (to himself- Does this guy ever understand modesty?) You can brag all you want Donald, but my county became a global nuclear power, with advanced ballistic missiles and no one, including you, could do a damn thing about it.

Vlad: (chuckling) Right on, Kim. We both know how to play Donald, don’t we? Play to his ego and you can get anything you want.

Trump: Don’t get over your head Vlad. You are an extortionist and you know it. Give me the video tapes you have, showing me with those four or five girls, you know in Moscow.

Vlad: That is the whole point my dear friend. This is how we exercise power in Russia.

Trump: Extortion hey, never mind, I like you any way. That’s why I want Russia to rejoin the G7. To keep you quiet.

Bibi: We all have our own skeletons in the closet, just ask my wife Sara. The main thing is, for me to be reelected I need you Donald. You are the one—the chosen.

Vlad: And for you to be reelected my dear Donald you need me. Happy to oblige, but always remember who the boss is.

Kim: Look Donald, I can also help you if you want. I can say that we made great progress in our denuclearization talks. We all lie, of course. You are the expert liar. What’s the big deal like you say?

Trump: It’s not funny. You are embarrassing me. You keep testing new missiles.

Kim: (to himself- Can this guy ever really be embarrassed?) Donald, I have to show my people that I am not caving in. You keep the sanctions, sorry, I keep testing.

Trump: I appreciate all that. But remember you need me – so, maybe we can make a deal.

Kim: This reminds me of your Deal of the Century, tell me, is there really such a thing? And what about Iran? You want me to trust you… how can I? No sir, for now, let’s just pretend that we are friends.

There is a knock on the door.

Assistant: Mr. President the General Assembly is about to begin.

Trump: Okay, okay. Gentlemen, it was really fun getting together. Hey, I have an idea. How about we just walk across the street to the UN building. No one would believe who we really are… they’ll think we are just crazy imposters dancing in the street.

Kim: Why not? Life is too short, especially in my country.

Trump: Let’s do it! (to himself- I will always have the last word, ah).

(Dr. Alon Ben-Meir is a CityWatch contributor and a professor of international relations at the Center for Global Affairs at NYU. He teaches courses on international negotiation and Middle Eastern studies.)