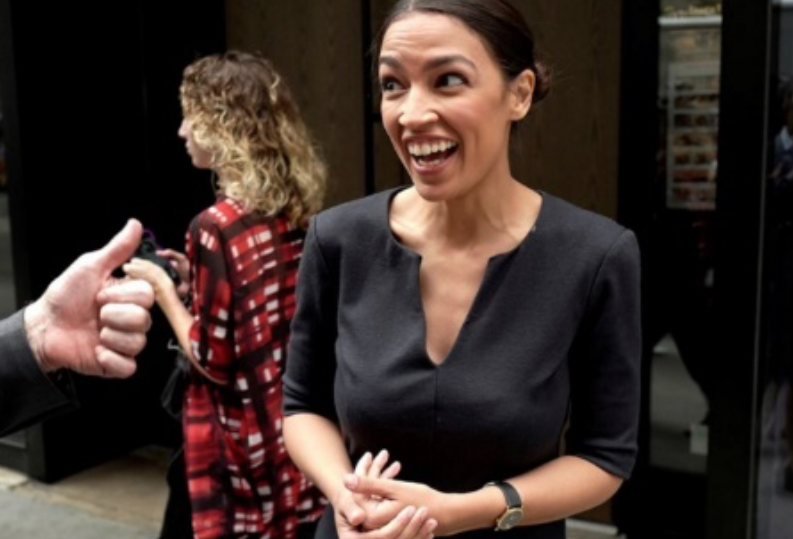 MY TURN-If you think Alexandria Ocasio-Cortez is new to the political scene, you are only half correct. “AOC” as she is known on social media pages is part of what is being called “fauxgressives” who have been carefully planning a takeover of the Democratic Party for a few years.

Under the tutelage of Bernie Sanders, Alexandria was an organizer for BS and lists her political affiliation as “Democratic Socialists of America.”

The DSA is a known divisive segment whose main goal has been to unseat Dems in local elections. As the main backers of Alexandria’s campaign, they filled social media and the airwaves with propaganda-filled ads, videos, and television spots. What better way to try to destroy the Dem Party than to add the chaos of an extremist who is young and attractive, and yet also has a kernel of shared ideologies of many of the Dems? But the extremist aspect doesn’t end there. Another major backer of Alexandria’s is the Justice Democrats, who have been aligned with many of the Russian brainwashing goals for quite some time.

To get a true picture of the bubble that the DSA exists in, you have to take a look at the fact that the DSA backed Ralph Nader in 2000, and in 2016 they not only endorsed Bernie Sanders but refused to endorse the true Democratic nominee for President, Hillary Clinton. One of the DSA leaders includes the radical (and often referred to as “crazy”) Cornell West, as well as other prominent anti-Democrats whose influence assisted in getting trump in office.

Justice Democrats have been part of the main anti-Democrat PACs that have had a sole purpose of attacking Democrats and promoting the extremist insurgents in an attempt to take over the party.

Some of the more well-known names of the JDs include The Young Turks, Our Revolution, and yes, DSA. The Young Turks was co-founded by a Putin puppet, Cenk Uygur and an individual named Saikat Chakrabarti who was responsible for developing technology for the campaign for Bernie Sanders. In 2017, Cenk resigned from TYT over “language deemed sexist or degrading to women.” As of Feb. 2018, there were only two board members of the Justice Democrats and Alexandria Ocasio-Cortez was given one of those positions as Chairperson; the other position is Saikat Chakrabarti who is also listed as being the senior adviser to AOC. 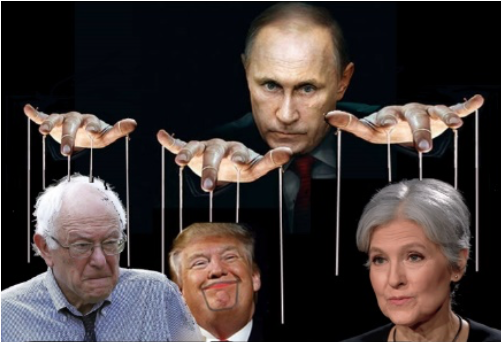 Wrapping your head around the chaos that Putin has been accomplishing means that you have to try to understand his long game plan. Putin and the IRA  (Internet Research Agency) have been playing everyone for the fools for many years. They have committed millions of dollars and a lot of propaganda in knowing that a majority of liberals agree on a majority of topics and that will simply not do. The goal is to throw dissent into the party, cause rifts and arguments, and what better way than to incorporate instructional classes. This is where Bernie Sanders came into play. BS has held meetings every summer that are called “Peoples Summit.”

These are typically led by the usual BS talking heads include Nina Turner, the anti-Democrat most well-known for throwing some of the key issues held by Democrats under the bus. The meetings themselves are instructional classes for those who want to learn how to infiltrate local Dem Parties, take them over, and then throw out all members who don’t align themselves with the so-called “fauxgressive” ideologies.

Other meetings that brought by the fauxgressive group included a Nov-Dec., 2018 meeting called “The Gathering.” Officially called, “A Gathering of Minds to Envision the World We Want,” the outline of the meeting has all of the hallmark rhetoric that is incredibly appealing:

“The Sanders Institute Gathering will convene 250 leading progressive minds to envision — and to actualize — a better future for our country and the world. Reaching across generations and embracing the inherent synergies across the progressive platform, participants will discuss and debate our nation’s most pressing issues and offer innovative solutions.”

So what’s the problem? The lead key speakers are many of those who were directly responsible for sharing the Putin-led fake news and misinformation campaigns against Hillary Clinton and elected trump: Susan Sarandon and Cornell West.

If you didn’t get the memo on Bernie Sanders and Jill Stein, you can catch up with the USA Today article  Indictment: Russians also tried to help Bernie Sanders, Jill Stein presidential campaigns.

“It turns out Donald Trump wasn’t the only candidate the Russians allegedly tried to help during the 2016 presidential campaign.

The Russians “engaged in operations primarily intended to communicate derogatory information about Hillary Clinton, to denigrate other candidates such as Ted Cruz and Marco Rubio, and to support Bernie Sanders and then-candidate Donald Trump,” according to the indictment, which was issued Friday.”

You see, Putin’s game is both sophisticated and complex, and involves undermining the one group that he knows takes pride in critical thinking and individuality: the liberals. 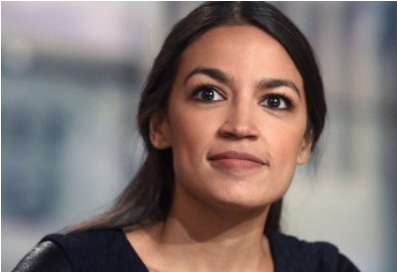 AOC: The Darling of Trending News

What you have to recognize about Alexandria is that she represents the best of all of what the current social and general media are looking for. She is young, attractive, not afraid to voice her opinions, and somewhat smart. In other words, she “trends well.” If you doubt this, all you have to do is view just some of the liberal male responses who seem to be defending her in a rather odd way as they also think that she is “hot.” The male liberal “feminist” voice is just a bit too loud as they haven’t done this with any other female representatives (even those who have announced their 2020 Presidential candidacy).

One of the major questions that has arisen is why conservative media is attacking her while standard Dems (non-fauxgressives) are irritated and angry with AOC? Why are there battles on two fronts? The answer is simple: Putin is using a reverse psychology that he used in his anti-Hillary Clinton campaigns. In this case, AOC has done the work expected, making some very well-thought out ideas while blending them with idiotic and just plain poorly planned concepts. In other words, he is using the kernel of truth and blending it with insanity to cause anger and confusion.

Since AOC won her very small district race, she has taken advantage of her celebrity by going on a national press tour, slamming Democrats, and then using a protest organized by Justice Democrats, attacking Nancy Pelosi. While she later claimed to support Pelosi, their attack was misplaced as it is the Republicans who are wreaking havoc on the climate change stand that they were “supposed” to be protesting. This stand had nothing to do with the environment and everything to do with the soundbytes that AOC and the JD wanted to attract.

AOC is not only a neophyte to the political arena, she is loud-mouthed, demanding, and often abrasive to fellow liberals. But then, this is how those summer training sessions told them that they need to be. Attack and eat our own so that you can get rid of any obstacles.

If you thought that the BS cult might have learned anything from the 2016 Presidential election, you would be dead wrong. Instead of looking at the stats, the numbers, the massive Russian influence and propaganda that they bought into, they instead cling onto the “it was rigged” concept. Denial seems to be a major role in their existence, and everything is the fault of the Democrats.

One would THINK that when posed with an enemy as disgusted and revolting as Trump and the Republicans, with actions that would not only be unacceptable but impeachable if they were done by Dems, the fauxgressives would dig their heads out of the sand to see that Putin and the IRA are playing them for the fools that they are. They continue to create their own manipulated ideas of the “pure” candidate, and thus far, very few meet up to their standards.

If Alexandria Ocasio-Cortez was truly “smart,” and not being played as one of Putin’s pawns, she would have entered her new position, learned a few of the ropes, understood how the D.C. game is played, and aligned herself with some powerful allies to achieve the very lofty and yes often admirable goals that she has in mind. Instead, she stormed the scene, yelled and demanded, made enemies of fellow liberals, and went on news programs making an idiot of herself. Add to this a poorly thought out and badly planned “Green Deal” that the Republicans, other conservatives, and even liberals are laughing at her for, and she has instead made enemies.

This is why newbies must earn their dues before they open their mouths.

It is doubtful that AOC will learn that she is being a “useful tool” by the IRA and more than likely she will spiral into a momentary blip on the trend scene once her usefulness is done.

(S. Novi is a journalist who worked in the media and continues to seek out truth and integrity. A liberal and one who is suspicious of cults and empty promises. Her posts originate at Medium.com. She is a contributor to CityWatch.) Prepped for CityWatch by Linda Abrams.