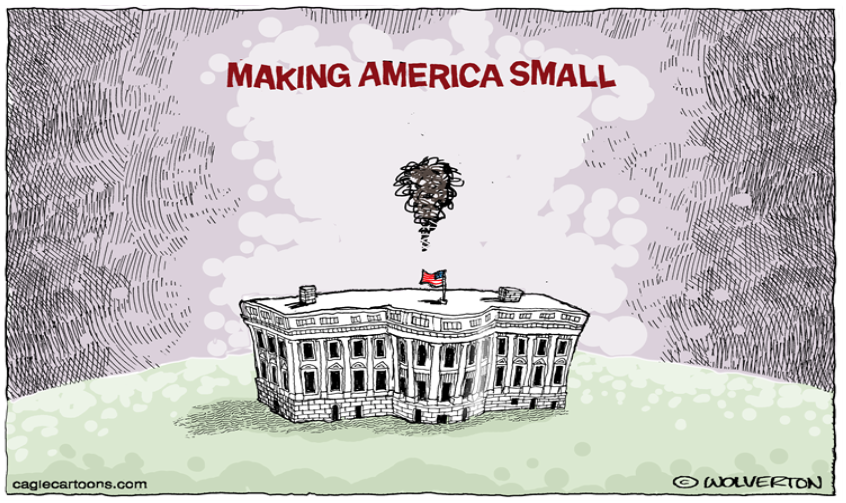 GELFAND’S WORLD--How can any nominally sane person miss the point that the current government shutdown is just another one of Trump's distractions?

It's there to keep the American people diverted from the serious investigations about colluding with Russia and taking money unethically from foreign governments.

The distraction appears to be working for the moment.

At the same time, it's functioning in a paradoxical way, because a majority of the American people hold Trump responsible for the situation.

In a way, Trump is creating a political problem for himself that is becoming worse than the collusion issue. After all, the collusion thing may be treason but it's a bit abstract and anyway, it accomplished what the right wing wanted (getting Trump elected). But with the shutdown, there are a lot of people who are being hurt directly -- right now -- and the news media are quick to show the rest of us their pain.

Trump, in his usual way, is doubling down on his threats, claiming that the shutdown could go on for weeks or even months. Will this happen? And if so, at what point will the public start to inform their elected representatives that it's time to replace Trump? Together, the House and the Senate have the power to do so. Trump's refusal to allow the U.S. government to function can easily enough be construed as one of those high crimes and misdemeanors that the Constitution mentions. Or if the members of the congress are really serious, they can toss in a couple of counts of bribery and treason. It's not a hard case to make.

Connecting a Pair of Dots

It was a curious question and answer. The press reminded the president that convicted felon Paul Manafort -- he of the 2016 presidential campaign -- had been funneling information during that campaign to Ukrainian operatives close to the Kremlin. When asked if he had known about the contacts, Trump said No. Trump's answer was curious because it gave away too much -- essentially admitting to the fact that Manafort was colluding with Russia during the time he was a central player in the presidential campaign. No "Fake news" rejoinder on this one.

You have to wonder how sharp the presidential brain continues to be. He didn't have the presence of mind to figure out that Manafort's admission connects several members of Trump's own family and his close advisors with the Russian collusion connection.

But there was one critical question which the press hasn't been following up on:

What brought Paul Manafort into Trump's presidential campaign? And, in particular, how did he come in at such a high level?

There is an obvious answer, but in mentioning it, we create an equally obvious question for the leaders of the Republican Party and the media.

The answer is that Donald Trump has been taking instructions from Putin since well before he won the nomination. Paul Campos presents a serious summation in his article Our Man in Moscow, which asks the question whether our president is an asset of the Russian government. What other explanation would there be for the insertion of a sleazy operative like Manafort -- connected to the Kremlin -- into the highest level of the presidential campaign?

Over the past couple of weeks, we have learned a few things more about Manafort. He has been described as a man who had run up considerable debts and was looking for a way to pay them off. The unredacted portions of Manafort's court documents show that he was passing information regarding Trump's internal polling data through the Ukrainian connection.

As careful pundits such as Josh Marshall have been pointing out, this revelation makes clear for once and for all that there was collusion between the Trump campaign and the Russians. It's right there in the court documents. The only remaining question is whether Trump was personally involved in the process.

I would like to suggest that we think about the history of 2016 in comparison to what has happened in other presidential campaigns. What other campaign in living memory hired someone at its top level who had been playing footsy with the Kremlin? Back in the days of the USSR, the mere hint of a communist connection was enough to destroy someone's career. The fact that Vladimir Putin's armies have been skirmishing along the borders of the old USSR is obvious and concerning. Why would Donald Trump hire somebody from the wrong side of that conflict?

The obvious answer has been floating around since the early days of the Trump presidency. Trump acts for all intents and purposes like a man who is in Vladimir Putin's back pocket. Why else would a supposed conservative like Trump hand a victory to Putin by promising to pull American troops out of Syria?

Here are a few obvious questions for the press to ask Trump or, if he isn't available, then to ask his press secretary:

Why did he appoint Paul Manafort to run his campaign?

Who introduced Trump to Paul Manafort?

Why didn't the campaign's vetting process show Manafort's connection to the Kremlin? Or did it?

How about a little payback?

Suppose high ranking Democrats in the House of Representatives make it clear that for every additional day that the shutdown continues, they will cut funding from the favorite programs of the right wingers who are prolonging the process? Trump and the senate Republicans have been able to rule by threat and bluster so far. How about returning the favor? Donald Trump can stomp out of a meeting with Pelosi and Schumer, but it will cost his constituents.